Skip to content
August has been yet another crazy month here (the craziness is certainly spilling into September so far). In terms of traffic and revenue, August has been a “steady as she goes” month here. With some of the sites affected by seasonality, we’ve only seen little growth in overall traffic. However, at the same time, we had an increase of 8% in revenue.
At the same time, we’re in the process of increasing our monthly investment in content to $15,000-20,000 a month. With our kind of workflow, relying on in-house freelancers, that process is proving to be a considerable challenge. It’s been keeping my husband and me busy seven days a week for three weeks now. If we ever actually get this business to work, don’t let anyone tell you it’s easy *wink*
The work overload is still preventing me from posting here more often. I’m not sure if that’s going to change in the coming weeks. Yeys may be “downgraded” to reports only for a while. I’m active on the Fat Stacks forums, so if you want to read more, or generally network, look me up there. The board is open only to customers who buy any of the Fat Stacks courses. I have them all and can highly recommend them.
No time for chit-chat today, so let’s move on to the report. If you’re already familiar with my business model, use the table of contents to skip to the juicy parts or go straight for the bottom line.

What is this report about?

Recap: I have a portfolio of content/niche sites. This blog – Yeys.com – is where I document my progress in detailed traffic and revenue reports. I started doing this in 2019. You can find the previous reports here.

Note: I have another large site that isn’t covered in these reports because it’s a community (forum) site. I try to keep Yeys.com dedicated to my content sites venture. Keep in mind that I am an experienced web publisher and have a constant stream of revenue, which allows me to invest in new websites. This kind of investment is not something I recommend doing if you have no reliable source of income.

Multiply this by dozens of posts a month, across several niches, scaling up by outsourcing.

We currently employ four VA’s and two part-time editors. In addition to that, we work with 30-40 freelancers that write a total of around 150 posts per month. We’re hoping to increase that number to 300 per month, and possibly more, in September. (If you’re curious about how we manage to produce so many content items, you can read here about my workflow).

Here’s what our collection of sites looks like at this point.

These sites cover large niches, so they have a lot of growth potential. Some are already fulfilling that potential, having 500+ posts, and growing. Others are still at the sandbox phase.

These were “carried over” from previous years before we devised the current strategy. These sites are small and will remain small simply because of the scope of the niche.

Traffic and Revenue for August 2020 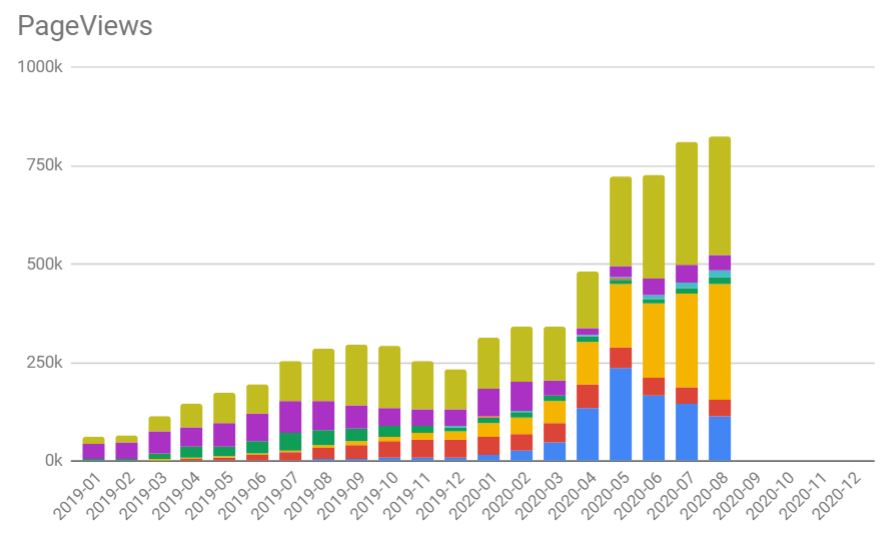 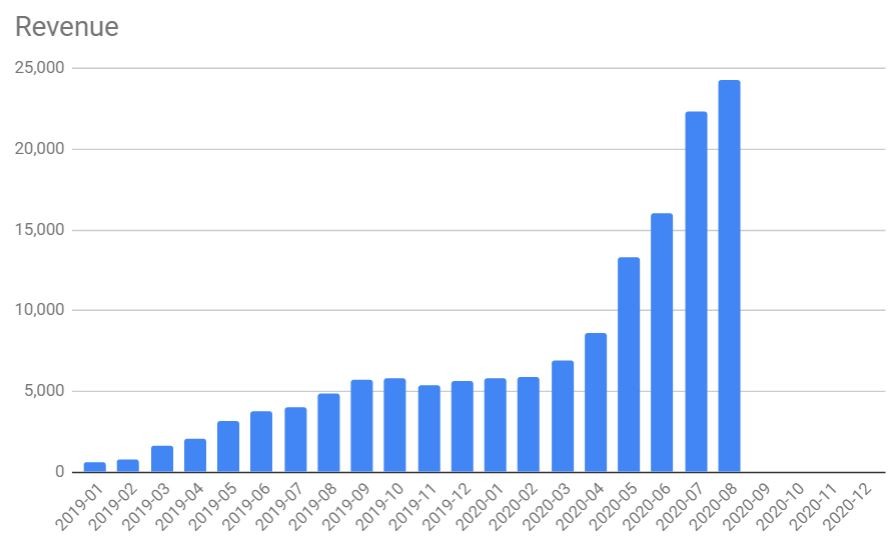 While growth seems to be slowing down, we’re still seeing a positive direction. The bottom line – that of revenue – keeps growing at the expected rate, albeit not in the crazy (unexpected!) rates it had during the past few months. As for traffic, this was August, the last month of summer. Several of our sites have marked seasonality, so by mid-August, they began to decline in traffic. We expect a similar trend to continue all through to March, but hopefully, as we keep adding content, we’ll be able to offset at least some of the decline.

Let’s take a look at the numbers for August per blog.

Site history: We launched this site in June 2016. I try to keep a personal tone in this blog. While outsourcing the bulk of the writing, I’m the one writing the outlines, intros, and summaries for most of the posts.

Monetization: About 75% of revenue comes from display ads via Ezoic. The rest is a combination of Amazon and Booking.com affiliation fees.

The blog currently has a total of 248 posts. We haven’t added any content in July.

Travel traffic began to partially recover from COVID in June. Industry RPM rates are slowly climbing up again too. However, this niche is seasonal. Even without a global pandemic, traffic is starting to decline by the end of summer.

Site history: We started this blog in April 2018. The niche covers vehicles of various types. The content is mostly informational with a few “best X of Y” product lists.

Monetization: The site makes about 85% of its revenue from display ads via Mediavine and 15% from Amazon affiliate links.

This blog had 821 posts by the end of August, making it the largest in our portfolio in terms of content.

July was pretty awesome with 310,650 pageviews, but in August, seasonality in some silos began to kick in. We went down to 298,453 monthly pageviews.

RPM rates with Mediavine remained high, and we ended up with $10,485 in revenue.

Site history: We launched the site in early 2019. The posts are a mix of informational and “how-to” posts, with inspirational picture posts and a few “X of Y” shopping guides.

Monetization: About 80% display ads via Mediavine and 20% Amazon affiliate revenue.

Finally, a niche that isn’t too seasonal. Whew!

Site history: This site was technically launched in September 2018 as a micro-niche site but was moved to a new domain in April 2019 when we decided to cast a wider net and turn it into an authority site. The content so far has been a mix of informational posts, inspirational photo posts, and some “Best X for Y” product posts.

Monetization: About 90% from display ads and the rest is Amazon affiliate fees.

The blog had 513 posts by the end of August.

Gardening is a very seasonal niche. We expect traffic per post to keep doing down through to January.

Site history: Launched in August 2019, this is an experiment in the YMYL field.

Monetization: None. The site is too small, and the traffic is too low. It does have some Amazon links in posts but not enough traffic for generating commissions.

The total number of posts remained 91.

We considered selling the site, but with no revenue, it’s going to be sold as a “starter site,” making it difficult even to recoup the cost of content invested. Since it does not cost us anything to keep the site, we’re just letting it sit there. As you can see, traffic is growing – very slowly. I’m just curious to see what happens over the next few months.

Site history: This site was launched in September 2019 (a few weeks after the finance site). The content is a mix of response posts, guides, and lists of inspirational images.

Monetization: No display ads. Amazon links on some pages.

As for monetization, only $20 in Amazon this month. We added Ezoic a couple of weeks ago, but still have to tweak that account a little bit. There are a few bucks there that weren’t included in the report. Initial RPM rates are very low so far, but my Ezoic rep gave me some suggestions for necessary tweaks. I’ll apply them this week and see what the effect is.

Site history: This site was launched in March 2018. It includes high-quality guides relating to aspects of the topic (how to choose, how often to clean, etc.). We also have some “X for Y” lists.

Monetization: Display ads by Ezoic account for about half of the revenue, with Amazon bringing in the other half.

The site currently has 80 posts.

Stable traffic in August, but I confess, this site is sorely neglected. We need to audit existing content (I have this nagging feeling that we’re miscounting the posts, and there are only ~50 published posts). We also need to look into the Ezoic settings and see if something can be improved.

Site history: Launched in October 2018, we built this site up to 100 posts (with the last posts added in April 2019). As for the type of content, it’s mostly response posts, but there are some tip lists and “best X of Y” posts.

Monetization: The site is monetized with a combination of display ads via Mediavine and Amazon links. About 50% of the revenue comes from each of these channels.

Another drop in traffic in August: from 45,101 pageviews to 41,803. However, Mediavine came through with RPM’s, so overall, the site made almost $250 more this month.

Site history: The newest site in this bunch was launched in March 2020. The original plan was to build it up to 100 posts, going after long-tail response posts, with some tip lists and “best X of Y” posts. It’s doing much better than we expected, with actual search traffic coming in from the first month. With that in mind, we decided to keep pushing content.

Monetization: There are Amazon links in some posts but nothing else (it’s brand new).

The site had 154 posts by the end of August.

Nice growth here, but we’re still seeing sandbox numbers at this point. Still, it’s always exciting when a site gets its first Amazon commissions coming in!

Here’s a breakdown of our expenses in August. By expenses, I mean the things that we would keep on paying, even if we stopped producing or promoting content altogether. The production and promotion costs we consider to be an investment that we can choose to make – or to avoid – each month.

Here’s how much we decided to invest back into creating more content. If we stopped creating and promoting content altogether, this would be money in the bank.

We produced 180 posts in August and increased the hours for our part-time editors.

The fiscal bottom line for August

As you may recall, last month I posted this in this section –

Our projections are for improvements in increments of $1500 per month moving forward.

So far, so good. August showed roughly that amount of increase in revenue. September may be a tad lower in revenue growth, but I’m hoping that the Q4, especially November and December, will make up for that.

We’re still expecting monthly revenue to grow by around $1,500 on average over the coming months.

I can already tell you that this is not easy to do. If you think that you can just turn on the tap and content comes out, well, that’s not how these things work. We’ve been focusing on two things for the last few weeks –

It looks like scaling to the next level is anything but easy. We keep coming up with new features, ideas, and methods to streamlining everything. And there’s still a lot of work to be done. We use Clickup to manage the entire operation and get this – at every given day, there are over 1200 open tasks in our system.

It really is a lot.

Since the prospects are high – and getting higher – my husband has reduced his “day job” hours by half and moved to co-manage the business with me. His management and operations research skills are crucial for our growth. I’m immensely fortunate that we work so well together and that he’s enjoying the game as much as I do.

When people say that 2020 is a crazy year, I can only nod my head in full agreement. It’s been a crazy year for the entire planet, but it’s also super exciting and special for our little enterprise here.

Again, my apologies for not posting more often here. I do try to keep up with comments, so don’t be a stranger and let me know what you think!