Many web publishers seem to be shying away from the notorious YMYL niches. But should we? Or maybe the potential is still there – even more than before, now that more people stay away from those niches?

Let’s talk about that. In fact, I plan on doing more than just talking. I just bought a YMYL domain today and will be launching a small YMYL site this month, as an experiment. More on that later on in the post.

What Are YMYL Niches

YMYL stands for Your Money or Your Life. That’s what highway robbers used to shout at their victims when they wanted to quickly grab their loot and leave. It’s also the name of a book about how to plan your financials. Published in 2008, it was a bestseller which made its impact.

For SEO experts and web publishers, YMYL refers to topics and niches that can directly affect a person’s health or finances. The idea is that Google has raised the bar for these niches so that a site needs to carry a lot of authority to compete in them.

Most experts say that any niche in health and finance is YMYL. Some will tell you that certain topics within niches could be considered YMYL as well. So, for example, if you have a website about home decor, you’ll be fine as long as you publish content about how to choose pretty wall decor items. But if you want to compete over phrases relating to increasing your home’s market value, that would be a YMYL topic.

The appeal of YMYL niches

Simply put, there is a LOT of money in YMYL niches.

These niches have always been the top-paying one in pay-per-click and lead-based revenue generation. They appear to still be so in 2019.

The main question is – can you compete over these keywords? According to most experts – only if you have enough authority.

Is E-A-T really a problem?

Moving on to the next acronym – E-A-T.

E-A-T stands for Expertise – Authoritativeness – Trustworthiness. It’s supposed to be a ranking factor – and one that effects YMYL sites more than others.

Judging by the latest recommendations, there are all sorts of ways to do that –

Can the algorithm really assess all of these things?

Meh. I highly doubt that.

Yes, E-A-T is official Google jargon. So is YMYL for that matter. But do you know where both originated? They’re part of that super-long and tedious PDF that Google released to the public in 2015, titled Search Quality Evaluator Guidelines.

As the name suggests, this is a document intended for that QA team that Google employs to manually evaluate the quality of search results. These PEOPLE are told to look at E-A-T, especially when they evaluate YMYL sites.

Clearly, it’s a statement of intent regarding Google’s preferences. But it also shows you that the algorithm can’t really evaluate these parameters. It takes a human to do so.

What if my site gets “audited” by a human evaluator?

I highly doubt that Google can really have a human being look into every site on the web. What’s more, the small number of sites that get sampled, don’t necessarily receive a manual penalty – they may just be used for statistical QA feedback.

More importantly – even a human evaluator probably won’t take the time to read your long “About Me” page, try to decide if you look like an honest person in your photo, or visit your YouTube channel.

In fact, according to Shawna Newman from SkipBlast.com – Google Evaluators are allocated mere minutes to assess a site. They’re paid by the number of sites they assess, so they’re not very likely to take a much deeper look. She should know, as she’s worked as a Google Rater herself, and her husband still does. Read her thoughts about E-A-T, from the unique perspective of a web publisher and former rater.

By the way, if you visit Google’s guidelines for webmasters, you’ll find no mention of either YMYL or E-A-T.

But What About The 2018 Medic Update?

In August 2018, Google launched an update that hurt many health-related websites. There’s no shortage of testimonies from across the web showing that indeed, quite a few websites took a massive hit.

So, who got hit and why?

Judging by the type of sites that were hit, it seems to be that Google was targetting sites that either directly or indirectly promoted anti-vaccine fake news. In other words, the so-called “alternative” medicine sites.

The best example is probably Mercola’s site. In their own words, the site was “buried”, losing all of its Google rankings. They actually posted the stats about that but I don’t feel like providing that site with links, so just Google “Mercola Google buried” or something and you’ll see it.

Now, it’s entirely possible that Mercola’s website was handed a manual penalty. I suspect – judging by the complaints following the Medic Update – that there was also a systematic filter placed, which went after pages that touted “health advice” while promoting supplements, homeopathic remedies etc.

Judging from websites presented in webmasters forums, or those put up for sale on Flippa and similar venues, I have a feeling that when small-size web publishers talk about the “health niche”, they usually mean holistic/alternative kind of approach. That’s probably because these web publishers are rarely health professionals, or have a real medical background. It’s easier to blab on about natural remedies for migraines, then to actually really analyze the latest neurological research and bring your reader evidence-based information, right?

Who does bring you evidence-based information? The Mayo Clinic, Healthline and government sites like that by the CDC. And guess what, they seem to be doing very well in the SERP’s still. Yes, they have link-driven authority. So did Mercola. So, this is not just about that.

Continuing this line of thought, I suspect that Google is really trying to kill the “fake news” sites of the health niche. The recent global Measles outbreak proved that anti-vaxxers were doing real harm when spreading their “fake health” information across the web. That’s what Google is trying to stop.

When it comes to health, there’s a clear line separating evidence-based medicine from so-called “alternative” or “holistic” trends. Anyone well-versed in scientific research in those fields can instantly tell the two apart. Sure, the Mercolas of the web love bragging about their “Scientific sources” but honestly, if you know anything about those things, it becomes super easy to tell pseudo-science from the real thing.

Are all YMYL Niches the same?

In health, the line is fairly clear. Not so much in the financial niches. There’s more room for opinions when it comes to investment advice, for example. I still haven’t heard of a finance-related decent niche site that got hurt by the latest Google updates. If you have, I’d love to hear about it in a comment.

Now, that doesn’t mean that finance is a fantastic niche. There are two problems with this niche –

I still believe that you need to write helpful well-researched content if you want to succeed. In any niche. In some niches, the entry bar is higher as you need to find really good writers, preferably with some background in the niche – to produce quality content. Finance, Legal and health, are such niches. You need to carefully consider whether you want to play those niches – but that has nothing to do with them being marked by Google’s algorithm as requiring special “E-A-T”.

I will be putting theory to the test with a new site. It’s going to be in the personal finance niche which definitely falls under the “Your Money or Your Life” definition. Here’s a step-by-step description of the plan –

I am currently working through step 5. I have my list of topics and I’m outsourcing them, about a dozen at a time. The entire project – steps 1 to 6 – should be done by the end of this month.

Clearly, it’s going to take time. With my other niche sites, the sandbox period has been 8-9 months. They have more than 30 posts and are in “softer” niches. With that in mind, I will re-evaluate the situation as the experiment progresses and may invest a small sum in link building as well.

Not using my in-house writers for this project, I outsourced the writing to 5-start level writers at WriterAccess.com. Since the search terms are very long-tail, I’ve limited the length of posts to 1200 words. That means each post will end up costing me about $96.

Hosting doesn’t cost me anything (using my own virtual machine over at Digital Ocean). I ordered a logo from a Fiverr designer for $7.

I estimate my time working on this little project at 10 hours.

Since these are long-tail queries, I’m shooting for an average of 250 pageviews per post a year into launching (once the site is out of the sandbox). That’s a total of 7,500 pageviews a month.

Assuming $30 “CPM” using Adsense, the site should generate $225 per month. It should then cover the costs within 13 months or can be sold for around $8,000 (roughly X36 monthly profits).

If I get a good indication earlier on, I’ll add content, of course, and may promote the site via Pinterest or link building efforts – but assuming no actions following this month, this is what I expect to see around August 2020.

Stay tuned for updates about this site in the next quarterly report! And leave me a comment with your thoughts too – I’d love to hear them!

Jasin left me a comment asking about updates. I have regular monthly traffic and revenue reports on the site, where I always review this site as well. However, it makes sense to provide updates here in this post, so I’ll start doing that, at least once a quarter or so.

So far, the site is definitely lagging behind. Big time.

Here’s a screenshot of the traffic from September (time of launch) until the end of June. 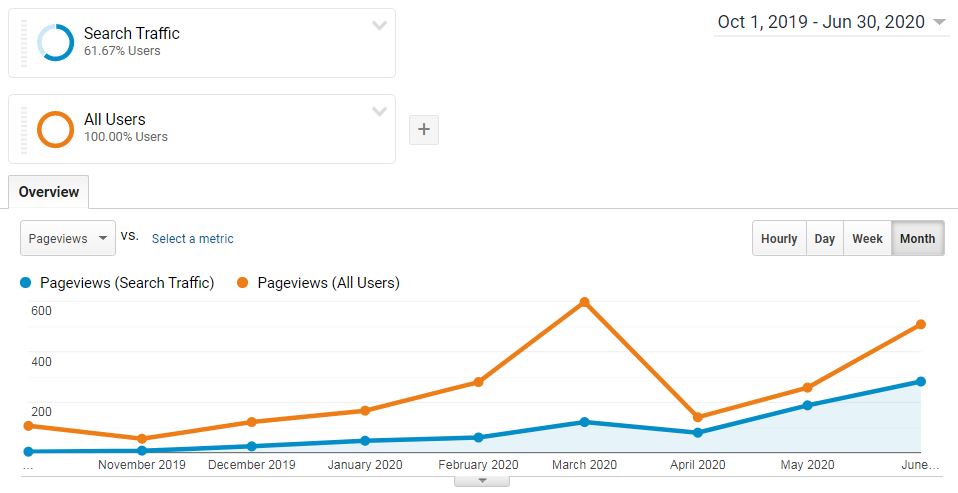 The good news is that the overall trajectory is positive. Search engine traffic is there, and it’s growing steadily, month by month. However, the process is incredibly slow.

Well, fortunately, I have a “control site” with which I can compare. Around the same time, we launched a site in the style and fashion niche with approximately the same number of posts. I hadn’t planned on it originally, but it turned out the sites were at the ~100 posts point at around the same time.

This is what traffic looks like for the style blog –

Note the numbers on the left. The overall trajectory is similar, but oh boy, are the numbers different. The YMYL site is under 300 pageviews a month from search traffic. The style site is at over 8,000.

By the way, if you’re wondering about the growth in traffic from other sources, that comes from a Pinterest push that both sites are now receiving, using the method in this course by FatStacks blog. If you’re looking for an SEO-like method to promote on Pinterest, I recommend that course.

So, there you go. That’s where we are with the YMYL site by the end of June. Clearly, the finance niche is very tough to break into. I’ll provide another update by the end of September. Until then, you’re welcome to follow that site in my monthly reports. If you don’t want to miss on any future report, make sure to subscribe to my mailing list as well.